3. The function of icons 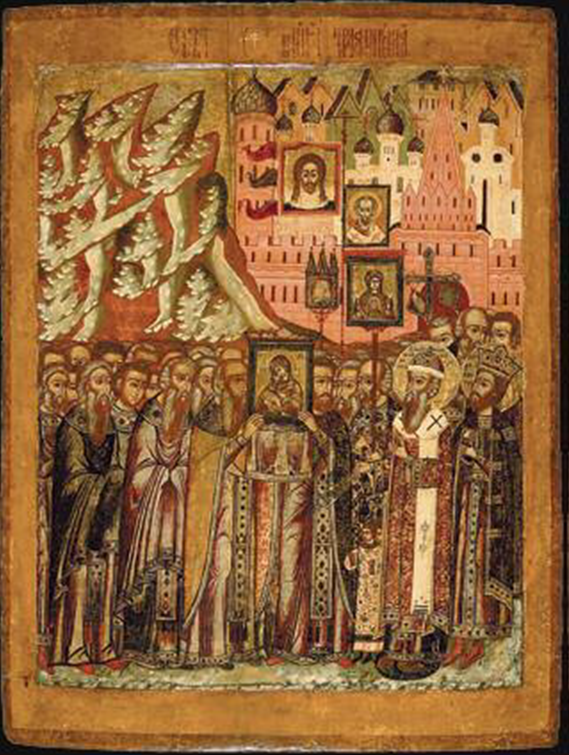 The function of icons


In pre-Revolutionary Russia, people’s entire life was permeated with religion: and through the centuries, icons played an essential part in this. Icons had a great advantage over frescoes and mosaics in that they could be carried in a procession, taken home or carried on a journey. Before the Revolution, icons were found not only in churches but everywhere – in schools, institutes, offices, hospitals, prisons, in niches in walls or trees, and even in restaurants or on street lamps. Russians would never abandon an icon: icons formed an essential part of life and accompanied one from cradle to grave.

Each Orthodox house, no matter how poor, had a ‘beautiful corner’ or a ‘red corner’, where icons were set up for private worship. It was the most important part of the house. Guests greeted the icons first and only then did they turn to the family. The houses of nobles had a special room for icons. Tsar Ivan the Terrible had over 3,000 icons in his. Icons were given to believers on special occasions, such as births or marriages, and also when they were about to go on a dangerous journey or campaign. Each day of the year was devoted to a different saint. When someone died, the mourners gave the deceased an icon to take with him on his final journey, and metal icons were attached to the cross erected over the grave.

Icons were believed to have miraculous and mystical powers. The help of special icons could be called upon in particular circumstances. For example, the prophet Elijah was called upon in the event of bad weather, St Blaise and St Modestos were invoked against animal diseases, Antipas would relieve toothache, while John the Baptist would deal with headaches. In this way, there was a special saint to cover all human needs, ailments and illnesses. Icons were also carried by the army in times of war: many victories would not have been won had it not been for the help of an icon. Today, icons are still carried in processions on Church feast days and other solemn occasions. [15]

Believers confided their problems to their icons and asked them for help and advice. Russians do not shut their eyes during prayer, but stand eye to eye with their icon. In his memoirs, the Russian writer A.I. Herzen (1812–1870) cites a letter from a friend, the philosopher Kireyevski (1806–1856):

‘I once stood in front of a shrine, looking at the miraculous icon of the Mother of God, and thought how childish was the belief of the people who stood praying. A few women and feeble old men made the sign of the cross and bowed low. They were looking at the holy image with fervent hope, and gradually I began to understand the secret of its miraculous power. It was not, after all, a mere painting. For centuries it had absorbed all the longings, hopes and prayers of those suffering and unhappy people. It was filled with the energy of all these prayers. It had become a living organism, a place where the Lord and humanity meet. As I was thinking this, I looked again at the old men, the women and the children who were kneeling in the dust, looking up at the holy icon. And then I saw the spiritual nature of the Mother of God and saw how she looked back at these simple people with love and compassion, and I sank to my knees and humbly prayed to her.’

Anyone who has ever been inside a Russian church cannot fail to be impressed by the special atmosphere created by the glittering of the candle-lit icons. You feel you are entering a microcosm, a different world, full of colour and divinity. Everywhere in the church you look there are icons – on lecterns, on lamps and on walls, and above all on the iconostasis. [16] 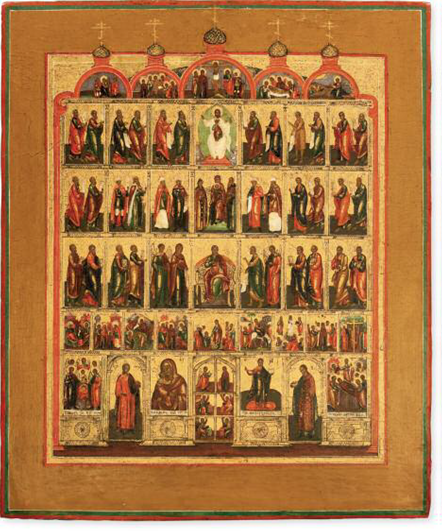 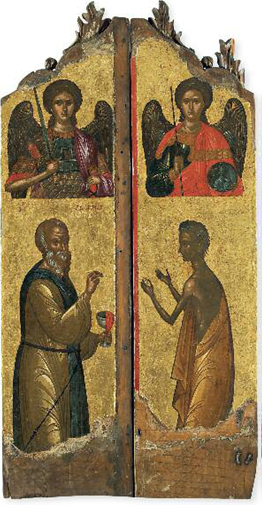 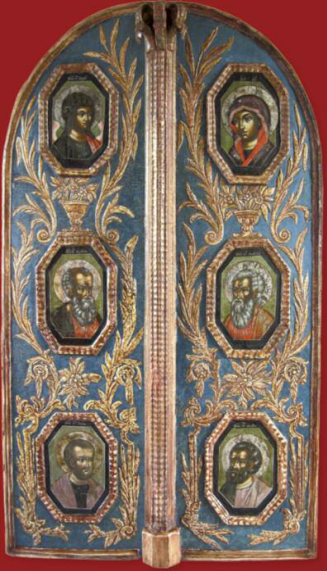 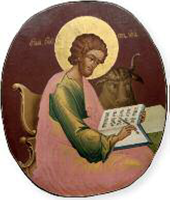 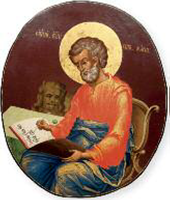 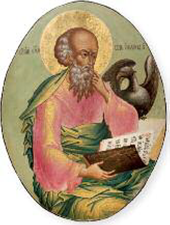 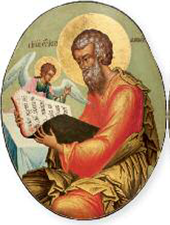 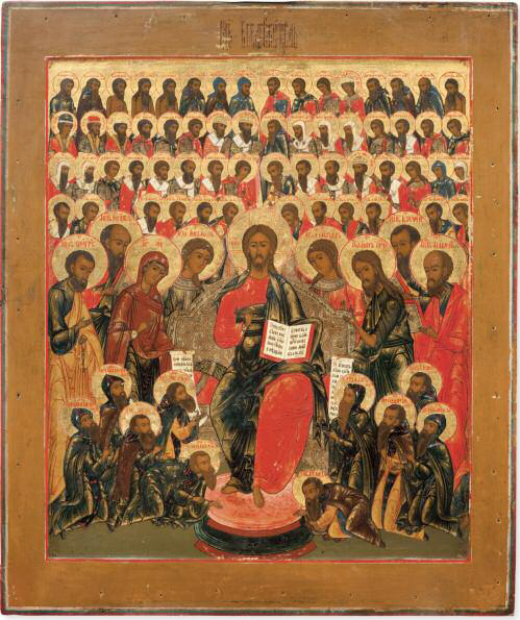 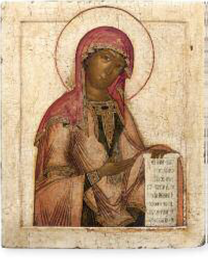 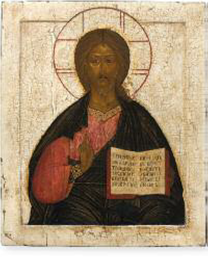 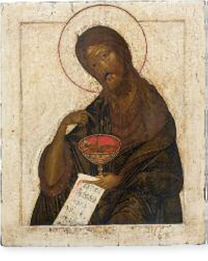 
An iconostasis is, in effect, a wall of images, which in Russia sometimes reaches up to five rows high, almost to the ceiling. Like the rood-screen in Western churches, which was once used to separate the sanctuary from the nave, the iconostasis has the effect of hiding the altar from the worshippers. In the Western Church this screen has now been removed to increase the involvement of the faithful in the liturgy. But thinking in the Eastern Church is different. The altar is separated from the worshippers by the iconostasis and the Royal Doors are kept closed during much of the Eucharist, not with the purpose of veiling the mystery, but rather to emphasise its sacred and devotional nature. The altar symbolises the spiritual world, while the nave, where the congregation stands, symbolises the material world.

For centuries, the iconostasis has had the same structure with the same elements. It has three entrances: a door at each side and double doors in the middle. Icons of angels and a holy deacon hang on the side doors. The door on the left opens into the Proskomidikon, where the Eucharist is prepared. The door on the right opens into the Diakonikon, where the liturgical vestments and books are reserved. The middle doors are known as ‘The Holy Gates’ or the ‘Royal Doors’. Behind these doors is the Holy of Holies, where the sacred mysteries take place. Only the priest celebrating the Eucharist is allowed to go through them.

The Royal Doors [17–19] are usually adorned with icons of the Four Evangelists – Matthew, Mark, Luke and John [1920] – and of the Annunciation.  Accordingly, it is through these gates that the priest reads the Gospel.

Above this row of icons, we find the Deësis (from the Greek deisis meaning ‘prayer’). [21] This is a row of icons with Christ in the middle. On either side of Christ we see the Mother of God and St John the Baptist (also known as St John the Forerunner). [22] Angels and saints bow to Christ to petition on behalf of humanity and to pray for forgiveness of its sins. For the faithful, this is an invitation to join in this prayer.

Above the Deësis, we find a row of icons depicting Christ’s life on earth. These are the icons of the Dodekaorton, the twelve major feasts in the calendar of the Orthodox Church.

While the lower rows of the iconostasis show scenes from the New Testament, the upper rows refer to the Old Testament: prophets holding scrolls with texts clearly referring to the Coming of Christ  are turned to face the central icon, the Mother of God of the Sign. Above this, there is a row of Patriarchs, who are facing the icon of the Trinity. The iconostasis is usually crowned with a cross.

2. Where do we find icons?4. Technique