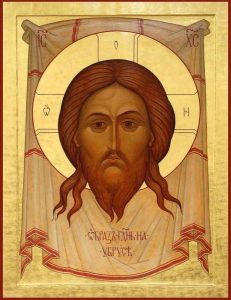 The One who before was without a body, by the Father’s good pleasure did not refuse to be formed with a body like ours, and has granted us the grace of a divine representation.

The unchanging nature, the most precise definition of the Father, having entered mortal flesh, left behind for us on earth his characteristics when he went back to heaven.

By your revered sufferings, O Christ, you justified your inheritance, which had been shaken by the deception of the Enemy, making it stable by the representation of your form.

Taking flesh from your pure loins in a manner above nature, O all-blameless, the One who gives being to all mortals became visible, yet not abandoning what he was before.

You wrapped the honoured Church around with raiment, O Saviour, when you moved the royal heart to seek out your likeness as a shield wall.

Wishing to strip away things that are good and diminish them in time, the begetter of envy shamelessly handed them over to polluted hands; but he was confounded, for his reckoning was in vain.

David once danced with radiant joy before the holy Ark; and now the one who has gained royal sceptres as his lot is glad to give them greater strength by the divine likeness.

Wishing to cut out from its root all the forefather’s natural disobedience, O Virgin, your Son assumed from your womb all that is human.

Kathisma of the Holy Icon. Tone 1.

The king of Edessa, recognising you as King of all things, who do not offer sceptre and army, but with a word multitudes of wonders, implored you, the God-man, to come to him. But seeing your impress on the towel he cried out, ‘You are Lord and God’.

As it leaves the city in the East and draws near ours, the King, wise in God, now receives your sacred napkin.

Sweet is the sun, which appears to the eyes; but sweeter the appearance, O Christ, of your likeness; for the one gives sensible light, the other spiritual.

Strength deserted the right hand of the Ishmaelite, for with the weapon of the Cross the stern King cast all its defence to the ground.

Intercede we beg, O most pure, that your city may be guarded unharmed from barbarous assault; for see what the boasters devise against her.

Small was the city that first prepared your reception, O Christ, which the coming of Thaddaios set free from diseases, the writing of your hand and the depiction of your face.

The gifts of your graces have been multiplied, O Christ; for the things which before Edessa held in its bosom as its boast, New Rome receives with rejoicing.

Halt the massed assaults of our enemies, O Virgin; destroy their devices; help your inheritance; for you see that we have been beset by evils.

You were fairer in beauty beyond all the sons of mortals, O Saviour; for though you had neither form nor beauty at the moment of your passion, yet you truly enlightened all things, and the sight of your form is revealed. Its likeness, imprinted on a cloth, has been granted to us.

The multitude of the strength of the Hagarenes has been removed and has now given, like an Ark from among foreigners to the new Israel, your imprint on a towel, O Christ, and your glory which it had also gained; for it is not right for Holy Things to be thrown aside.

Just now I was fainting, O Saviour, from the strength from your hand; but take your blows from me at the prayers of her who bore you without knowing man, O Word, and do not abandon me to be drowned by the tempest of sin and suffer dread nausea, O only Redeemer.

The Youths in Babylon.

O Word of God, when you dwelt on earth you drove out every disease with a word; but returning to your Father’s throne you heal our diseases through your Imprint.

The One who created all things by a word, and who received a form that was not his, has left behind for us visible appearances of his own form. As we receive them with gladness, we rejoice.

The faithful king, seeking with his whole soul an impression of your form, Lord, as he sought so he found, discovering the fitting fulfilment of his godly longing.

By your conceiving humanity was freed from the ancient condemnation; for God, having found you alone to be wider than the heavens, O All-blameless, made you his dwelling.

As in a vision, the whole chosen people of the city, hoping that you, the Lord, will make your home there, gives you a wondrous welcome, leading out a choir of High Priests, carried on whose shoulders and entering your own inheritance, O Compassionate, you came to rest in your Mother’s shrine.

The mouths of innocent children sang your praise as you journeyed to the city that slew the Prophets; but the lawless synagogue of the Hebrews armed a murderous hand and raged against you. But now the lawful city, pouring out with all its people because it sees you, the Creator, rejoices as it receives the imprint of your form.

The Angel of Great Counsel of the Father, having chosen to put on flesh, was brought to completion in your womb, O All-pure. He declared you to be his Mother below, O holy one, and renewed corrupted mortal nature. We bless him as Creator and highly exalt him to all the ages.

A people without understanding raved against you, O Saviour, and in return for kindness shamelessly threatened dreadful deeds against you; but we, who had been thrust far away, were adopted as children by your sufferings, O Saviour.

Grant help against their enemies to the Orthodox and to their faithful Sovereigns, because we have gained as an invincible protection, Master, the symbols of your flesh. Through them they look towards their salvation.

The Word of God, bearing a body, appeared to those on earth, double by nature from you, O All-blameless, by exchange of the Godhead, united without mixture in one hypostasis by the mingling. Him we glorify.

Glorious great Martyr, divinely you empurpled the Church of Christ with the streams of your blood; while you quenched the soul-destroying deception of idols, all-blessed Diomedes; and now do not cease to intercede for us to the Lord.